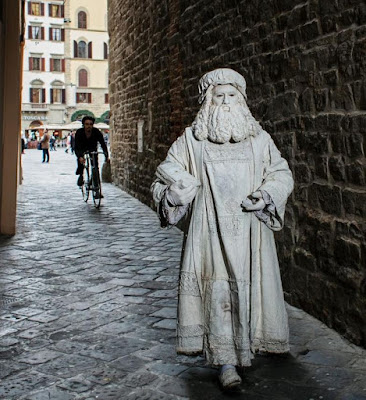 In Florence, Leonardo became known for his prodigious talent
and received his first commissions. He was “an ornament, a
symbol of power,” says scholar Paolo Galluzzi. Here, Valter Conti,
an Italian street artist, personifies Leonardo’s celebrity status as he
strolls toward the Uffizi Gallery to pose for photographs with tourists.


In an instant, centuries collide—a moment unlike anything I have ever experienced. I have come to Windsor Castle to see the queen’s collection of Leonardo da Vinci drawings.

Outside the towering stone walls, tourists snap selfies and rummage through souvenir tea towels. Inside, past an arched gateway bedecked by gargoyles, Leonardo ushers me back to the Renaissance.

I can almost hear whispers of the artist as I gaze at a leather album bound in the late 1500s in the castle’s stately print room. Gold embellishments adorn the volume’s two-and-a-half-inch spine. The cover, stained and worn by the imperceptible fingerprints of generations past, reads: Disegni di Leonardo da Vinci Restaurati da Pompeo Leoni (drawings by Leonardo da Vinci conserved by Pompeo Leoni).


No one knows precisely how this album made its way to England, but its provenance is unambiguous: Leoni, an Italian sculptor, acquired Leonardo’s drawings from the son of the artist’s devoted pupil Francesco Melzi and mounted them into at least two volumes. By 1690, the Leoni binding, as it’s known, had landed in the Royal Collection, teeming with 234 folio sheets and the peregrinations of Leonardo’s inquisitive mind.

By Claudia Kalb
Photographs by Paolo Woods and Gabriele Galimberti