TIME magazine has nominated NASA's most technologically advanced rover yet as one of its nearly 40 candidates for the "Person of the Year" designation. Describing the sole robotic nominee as the "best car in the solar system" that captured the attention of millions when it completed a fraught landing sequence with seamless grace, TIME is giving readers a chance to cast their vote for the venerable spacecraft.

A real-time ranking of all the nominees, including Curiosity, is available at here

For more information about Curiosity and other Mars missions, visit: http://www.nasa.gov/mars 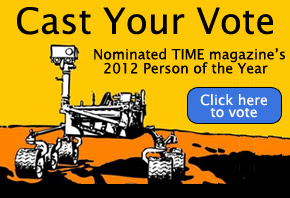